The history of the internet 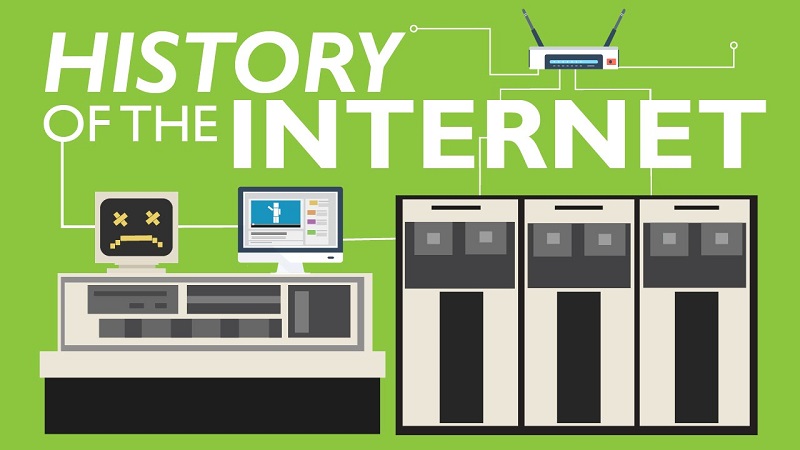 27 Mar The history of the internet

Already in 2021, we have become nostalgic and we have looked back to the origins of the internet!

In previous posts, we brought you a little closer, in a didactic way, concepts and information related to technology, software, design, among others. But many times to fully understand the present and the things that surround us today, it is necessary to understand and know the past … its history. And it is what we have come to tell you today; the history of the internet.

According to history books, the first known computer dates from 1943, introduced by engineers John William Mauchly and John Presper Eckert in Iraq. It was a digital machine with 6,000 switches and 27 tons of weight, capable of doing 5,000 additions and 300 multiplications per second. Right now talking about 300 multiplications per second would be almost ridiculous. Considering the capacity that the processors we have and use today have acquired.

As curious data, this huge machine/computer would cause power outages in the city of Philadelphia every time it was turned on and its creation was related to the Colossus project, used by the British to decipher the messages of the Germans during World War.

Curiously and proudly, despite the fact that its creators were Mauchly and Presper, who carried out its management were 6 women. They were the ones who had all the knowledge of how to program and operate with that great machine.

The internet revolution: time and space

As we have seen, on the one hand throughout all these years, since the creation of the first computer, there has been a great evolution of “time”, the processors have shortened immensely all that time it took for the first computer to perform a task, up to what it takes today. But on the other hand, there has also been a great revolution in “space”. What before physically needed a huge space to be stored depending on the amount of information. Today we store the amount of information and data in physically very small spaces.

A great example of all this progress was the first computer taken by the astronauts who stepped on the moon on ApolloXI, it weighed approximately 31 kilos and had 4 million less ram memory than a computer today.

To give us an idea, our current mobile is infinitely more powerful than that computer that was taken in the space spectrum.

What propelled this advancement and improvement so fast since the first computer? Well, something as imposing as communications always linked at that time to wars and military strategies.

The Cold War was a great driver of all these advances at that time. They needed to have control of the entire missile network that had been deployed in allied countries. But at the same time, the concern arose to make that network not depend only on a central computer. So that if any equipment or computer was damaged. The information would not be lost but could circulate among the rest.

Derived from all this thinking in 1969, the first network without central nodes was established ARPANET, of which four universities were part: Los Angeles, the University of California Sta. Barbara, the University of Utah and the Stanford Research Institute. This served for these universities to communicate with each other, without a central computer.

In 1982, ARPA declared as standard the protocol known as TCP / IP (Transfer Control Protocol / Internet), which established how we could communicate through the different existing networks. This is when the first definition of “Internet” was born, which was defined as a set of networks connected by TCP / IP.

The following year, in 1983, the Defense Ministry left APARNET. And established an independent network under its absolute control (called MILNET). Of the 113 nodes that formed the ARPANET at that time, 68 moved to the new military network. As we can see, it returned to its military origin.

Until that date, the internet was not very attractive or of great interest to the general population. Until Tim Berners showed up.

Berners made the internet what we know today. He started working on HTML, which is the basis of the web pages we know today. HTML allows you to combine text, images and establish links with other documents. He is also credited with creating the first World Wide Web server and the first World Wide Web client program. From here on, the concept of the internet changed completely. Because it was possible to create multimedia documents, write, design. We could really take advantage of it and not use it as a simple database.